Life with my brain tumour warrior. 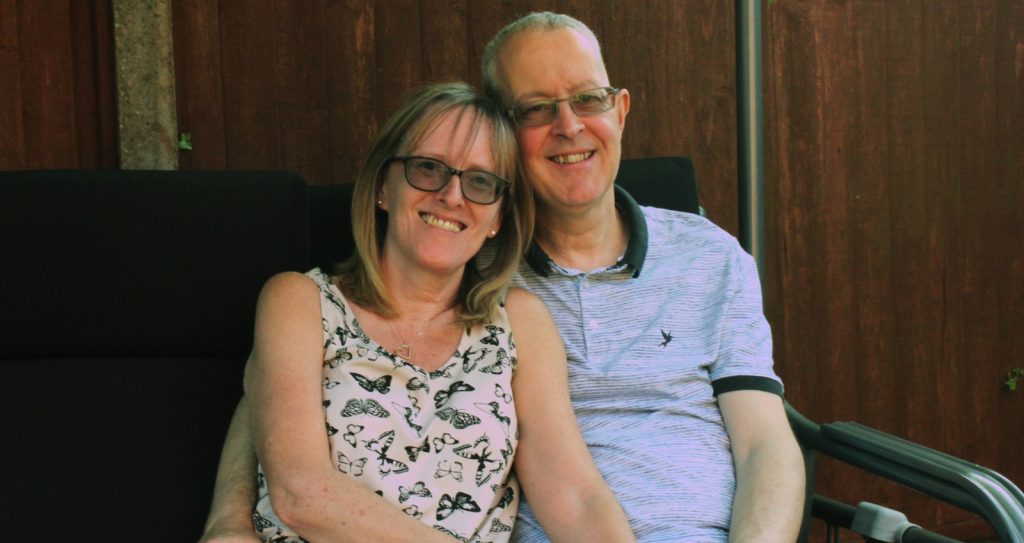 “Living with a person after brain surgery for a tumour is like living with a person who has suffered a brain injury. They are very different people, but… and this is a big but.. they are still the same person inside. Ian doesn’t want to be treated any differently, he is still my Ian.”

In November 2019 my life and that of my family was turned upside down when my husband suffered a seizure whilst out with our kids. If it wasn’t for the quick action of his son Dom (who is a trainee Paramedic), I’m not sure if Ian would be with us now.

After suffering his seizure, my husband was taken to Walsgrave hospital and, after lots of tests and scans to determine what caused this scary experience, he was diagnosed with a Glioblastoma Multiform Grade 4 brain tumour, which is the most aggressive type of adult tumour. He then went through an awake craniotomy on the 17th December, where over 95% of his tumour was sucessfully removed.

When Ian finished his 6 weeks of radiotherapy and chemotherapy on the 18th March, we were told by the Oncology team and his surgeon to go and ‘make memories together’ and then of course, Lockdown happened!! The ‘new normal’ we envisaged turned out to be quite different. We were told after surgery that it would take around 12 to 18 months for Ian to ‘recover’. We must remember that he’s had major brain surgery and that things take time to sort themselves out. After his surgery I went from being Ian’s wife to his carer. A lot of the things have changed….. We are all having to learn day by day – I’ve tried to summarise just a few of the regular events where our life has changed, to help raise awareness of the impact an brain tumour can have on your life and on the life of your family.

DRIVING – Ian had a second minor seizure the day before his surgery so he had to surrender his licence. It’s a loss of independence, which is difficult to manage. We’ve been told he can apply for it again after being 2 years seizure free, so continue to hope that Ian will be able to drive again in the future.

WORK – My husband semi-retired from his role as Operations Manager in August 2019 but was hoping to do some part-time work – unfortunately as his vision in his right eye is poor, he’s now unable to work at all, which is hard news to process. The medics have told us that this may improve, but it may not….we’ve just got to wait and see. Not knowing what the future holds is a common concern for us as a family, in all aspects of Ian’s life.

SPEAKING – the left temporal lobe, where Ian’s brain tumour is, is the area which controls our speech. He elected to have an awake craniotomy so that they could preserve as much of his speech as possible, but it has still been greatly impacted. On the day after surgery there were only 3  words Ian could say, one was the word ‘bad’ and I’m unable to put the other two in here! But this is something he has had to work hard to regain. As a family we are learning to understand what Ian means – sometimes he mixes up words and uses ones which are similar to what he means or describes. For example he’ll say “I’ll go and put the dishwasher on” but he means the washing machine.. It’s often a bit of a guessing game!

READING – As his vision is weak, Ian struggles to read anything of detail or with lots of words. If he receives a text that he doesn’t feel he can read, I read it for him. When he does read, it’s very child-like. It’s something most of us take for granted being able to do and this has been hard to adjust to for all of us.

HAVE A JOKE… you may wonder why I’ve added this, but personality changes are one of the most difficult changes to adjust to. Ian’s personality after surgery was very different to the ‘old Ian’ and this has taken a lot of getting used to – and in some ways I’m not sure we will ever come to terms with this. He would always laugh and joke with the kids and his friends, but this has stopped. The kids, especially the boys, found this very difficult to handle as dad wasn’t the same. However, on a positive note, we’ve noticed over the past few weeks that Ian is starting to show more of his old traits, which is fantastic to see and we hope is a postive step back to the old Ian.

HIS INTENSITIES AND EMOTIONS – Ian has always been very passionate about everything he does. Since his surgery his intensities have become stronger. One example is using a recipe to make something for tea. If he sees a list of ingredients of say 5 or more, he can’t deal with it and thinks that I can’t either! We can have had a few ‘heated conversations’ when cooking tea, so managing how we react to one and other in our relationship has had to change and is something we work hard everyday to continue to improve. He is also much more emotional than he was before, but he is learning to manage this. Another example is if he’s worried about something, or he’s got an appointment to go to, then that will be his focus and all he will talk about.. regardless of what time of day it is. He gets fixated on one thing which can be hard to deal with. 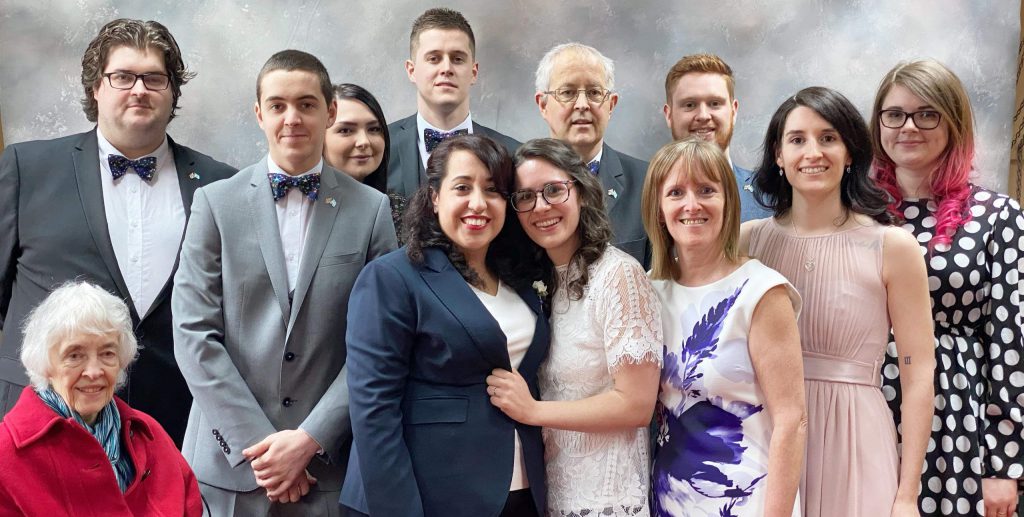 At the start of all of this everyone used to say to me to make time for myself as well as being there for Ian. In the early days this was so difficult as I couldn’t leave Ian on his own and Ian couldn’t understand why I needed time to myself. But with the help of our kids, slowly but surely I had the odd hour or two out with friends and when lockdown eased over the summer, we were able to go to friends and to see our kids…

Despite everything that has happened this year, we are getting on with life and Ian continues to improve daily as the brain makes its new pathways. His chemo is for life and we’re hopeful that it will go from 5 days chemo/23 off, to 5 days chemo/30 off, which will give us more time to spend together and amke new memories, but we will take guidance from his Oncology nurse as to when this is possible. We have been so fortunate that Ian has been able to continue his chemo throughout the whole of lockdown, as we know others havent been so lucky. He started his 8th cycle on the 28th September. As we move into a second lockdown, we’re keeping sight of the positive events we have had this year. Our daughter and her wife got married on 22nd February and this was a very special day, just before we were locked in! Ian and I also managed a few days away at Rutland Water – very different to our usual Cruise holidays, but it was fantastic to have the break together.

We are also grateful that through The Lewis Moody Foundation, we have met an amazing couple called Oliver and Sharon Highway. Oliver is 8 years into his treatment for the same tumour as Ian and has had chemo every month since his diagnosis. He is an absolute inspiration and we are so blessed to have them as our close friends. Sharon has been there for me when I’ve noticed things in Ian and when I’ve spoken to her, she’d say ‘Oh, Oliver did that!!’ which is so reassuring.

The main positive is that Ian is still with us and what he’s been through is absolutely mindblowing. We have nothing but gratitude to his surgeon (who gave him the chance to have the awake surgery), to the team of specialists who were with him on the day and finally to the Oncology Team at Walsgrave who have been so patient with all of our questions.

Living with a person after brain surgery is like living with a person who has suffered a brain injury. They are quite different people, but… and this is a big but, they are still the same person inside. Ian doesn’t want to be treated any differently, he is still Ian. It’s tough, but in sharing our story we hope to raise more awareness about brain tumours and their effects on family life, this international brain tumour awareness month. 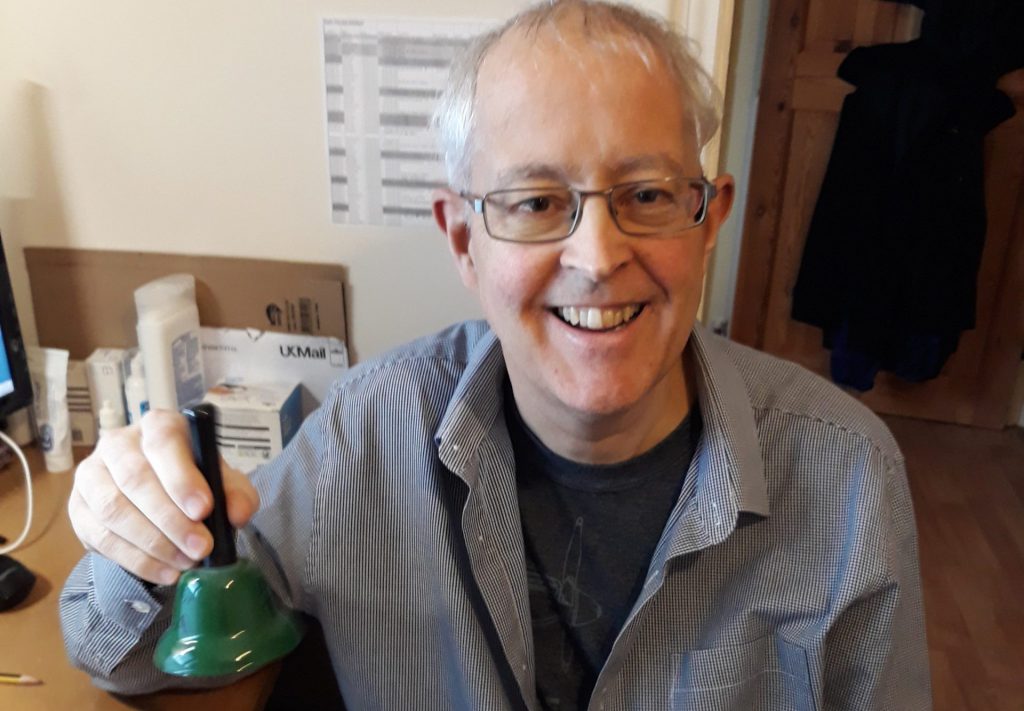 With thanks to Christine and Ian Judge for sharing their story. Together we can #TackleBrainTumours.

Find out how your money
makes a difference